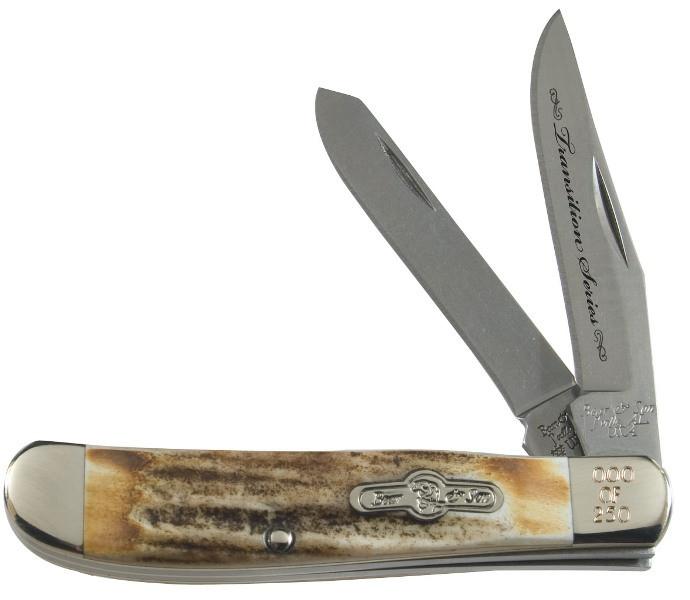 The Transition Series is a Limited Edition Set of 12 pocket knives with Genuine India Stag Horn handle scales individually numbered of 250 pieces per pattern. Originally issued in 2010 and are no longer in production.

The trapper is one of a family of knives known collectively as jack knives. Strictly defined, a jack knife is a slip joint folder with two blades that both open from the same end of the handle. Typically, the main blade of a jack knife will be a clip pattern with a smaller secondary blade in a pen pattern. Closed lengths of jack knives generally range from less than three inches to about four inches long. The most obvious thing that distinguishes trappers from other jack knives is that a trapper has equal length blades. The classic trapper has clip and spey pattern blades.

The Transition Series celebrates the change of Bear & Son tang stamp from 2009 to 2010. The new 2010 tang stamp shows 10 stars instead of the dots used in the last decade. The stars are a salute to their American made Tradition. This Series contains some great patterns made in the 24 years of knife making tradition in Jacksonville, Alabama. What makes this transition series special is these knives will be produced in the 25th year of knifemaking tradition by craftsman & women in Jacksonville. Some of these patterns date back to patterns that were made in 1986. Only 250 of each knife were produced. This makes this an extremely limited series that will see its collector’s value rise quickly. Each knife will come with a certificate of authenticity with some history of that pattern and the changing of the tang stamps. These will have short nail pulls, Genuine India Stag Horn handles, high polished blades, Bear & Son Shield, polished backs, main blade etched Transition Series 2009-2010, serial numbered and pinched front bolsters on patterns that apply. Made in the USA!