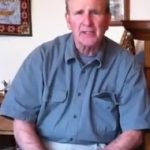 Wow! A Jay Hendrickson classic handmade Drop Point hunter with curly maple scales on full tang 5160 steel. The curly maple handle has been inlaid with fine silver vines with leaves and the nickel silver guard and arrowhead on the sheath demonstrates the full range of Mr. Hendrickson’s talent. The butt is sculptured and you will find a shell inlay on the butt and above the guard. Although too pretty to use, it is a fully functional hunting knife with a contoured handle that perfectly fits the hand. From the forged steel to the custom sheath all by the maker this heirloom quality piece is quintessentially Jay Hendrickson, already a knifemaker legend.

Jay Hendrickson was born and raised in Susquehanna, PA. He started making knives in 1974 and became a full time maker in 1987. He received his Mastersmith Certification in 1989. He is a past president (1991-1995) of the American Bladesmith Society (ABS). Influenced by neighbor and friend, Bill Moran as evidenced in his work; high quality blades, wonderfully worked handles, scrupulous attention given to the tiniest detail, inlaying as well as sheaths.