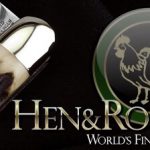 This is a classic Whittler double-hinged pattern based off of the Pen knife. In addition to the traditional Clip and Pen blade combo, it includes a Coping blade that shares a hinge pin with the Pen blade. This triple blade configuration possesses all the edges and points necessary to carve, scribe and shape wood properly. This Hen & Rooster Whittler has 440 blade steel and good looking Stag handle scales. A nice collector piece or a versatile EDC!

Conceived and hand-made in about 1845, the Hen & Rooster® brand had a modest beginning as the notion of Carl Bertram. Mr. Bertram was a well-known owner of a poultry business in Solingen, Germany where he began manufacturing his own line of cutlery. Carl Bertram's company continued manufacturing its fine cutlery under the leadership of several family members for many years. In 1975, the firm was purchased by A.G. Russell of Springdale, Arkansas. In 1983, the firm was liquidated, and the Hen & Rooster trademark and the Bertram name were acquired by James Frost of Frost Cutlery, Chattanooga, Tennessee,. Mr. Frost holds firm to the long-distinguished tradition begun by Mr. Bertram, ensuring the superior craftsmanship of each Hen & Rooster knife. These pocketknives continue to be manufactured by highly skilled craftsman in Solingen, Germany. Through its reputation of excellence, Hen & Rooster® continues carries the title of “World’s Finest Since 1845”.